In February, my husband planned a Boys Trip to Vegas for his 30th Birthday. So, naturally, I planned a trip of my own to Belize!

My cousin is a flight attendant for Southwest, and was able to grab buddy passes for my uncle and I to Belize! We chose Belize based on the number of flights in and out of the country (since we’d be flying standby) and because it’s budget-friendly. Honestly, I don’t think we could have chosen a better location! We had about 48 hours of vacation, and I wouldn’t change a thing! Here’s what we did: 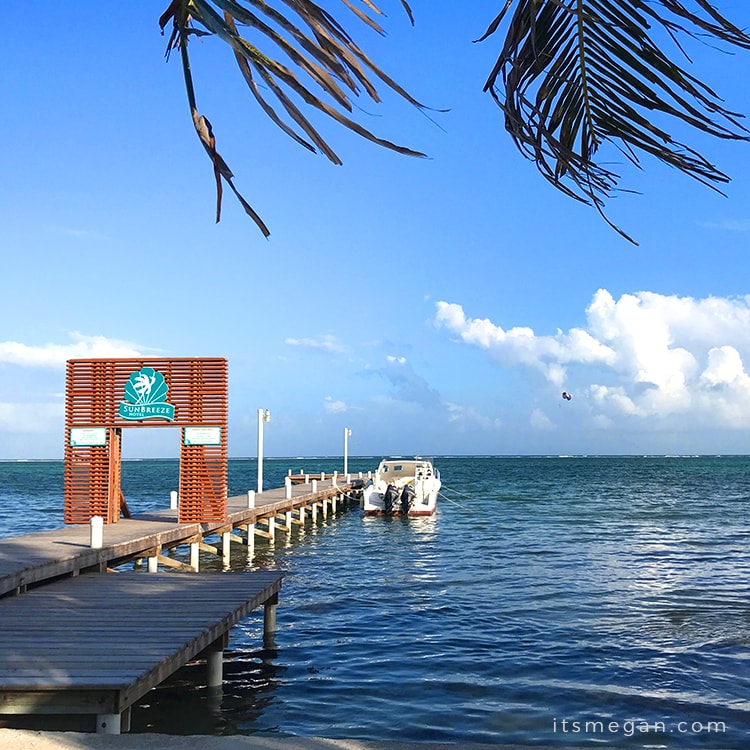 We stayed in San Pedro on Ambergris Caye, and I would highly recommend it! A lot of people also recommend Caye Caulker which looked cute as well, but based on my research, there’s a lot more to do on Ambergris Caye! We stayed at Sunbreeze Hotel which was perfect! One of the most blogged about restaurants is at Sunbreeze Hotel, the building itself is right on the beach, it’s across the street from the airport, and has golf cart parking. The island of Ambergris Caye is accessible from the mainland via plane (15 minute trip from Belize City) or by boat (1.5 hours from Belize City). The flights run anywhere between $60-$180 one way, and the water taxi is $28 one way, $38 round trip. The water taxi is a 20 minute taxi ride from the Belize International Airport, which cost about $25 one way.

Belize is so beautiful and so unique! The mainland offers jungles, Mayan Ruins, caves, and wild life sanctuaries. The water offers amazing snorkeling and scuba diving in the second largest barrier reef in the world, the Great Blue Hole, swimming with sharks and the Split in Caye Caulker. Here’s what we did with our 48 hours: 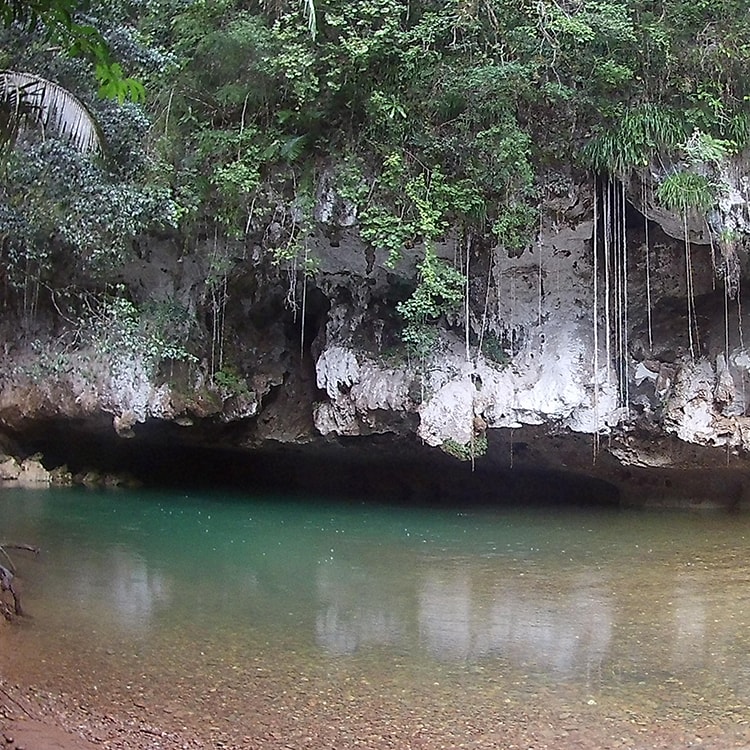 We did the Butts Up! Cave Tubing and ATV Jungle Tour – and because we weren’t part of a cruise ship, we had our own personal tour! There were two tour guides and three of us. It was awesome. They picked us up from the water taxi in a super comfortable truck and drove us to where they do the ATV Jungle Tours. On the trip there, they gave us some history about Belize, pointed out interesting places we were passing (like the “Sleeping Giant”, a mountain range that looks like a man sleeping on his back), and answered any questions we had.

I haven’t driven an ATV in years, and I only got stuck one time! It was towards the end of rainy season, and the trail was pretty much a river. In some areas, the water was so high you had to pick your feet up! The jungle itself was beautiful with the sun was coming in through the trees – I wish I would have been able to look at it a little more, but I was too focused on not running in to the person in front of me :). Needless to say, we got pretty muddy. Make sure you pack clothes that you don’t mind getting dirty!

First and foremost: you’re required to wear water shoes (for good reason). If you aren’t able to pack water shoes, they do rent them there. I purchased these ahead of time and they were cute and really comfortable, I highly recommend them!  It’s about a fifteen minute walk to the cave opening where you actually begin tubing. While walking through the jungle, the guide told us about old Mayan traditions. If you see the Prickly Yellow Tree on your walk, ask your guide about it! The Cave Tour was relaxing and interesting. Our guide even stopped at a waterfall, letting us hike around and showing us the glittery calcifications and oddly shaped rocks. Because we weren’t part of a larger group, we had the entire cave to ourselves for most of the tour. It was very cool! 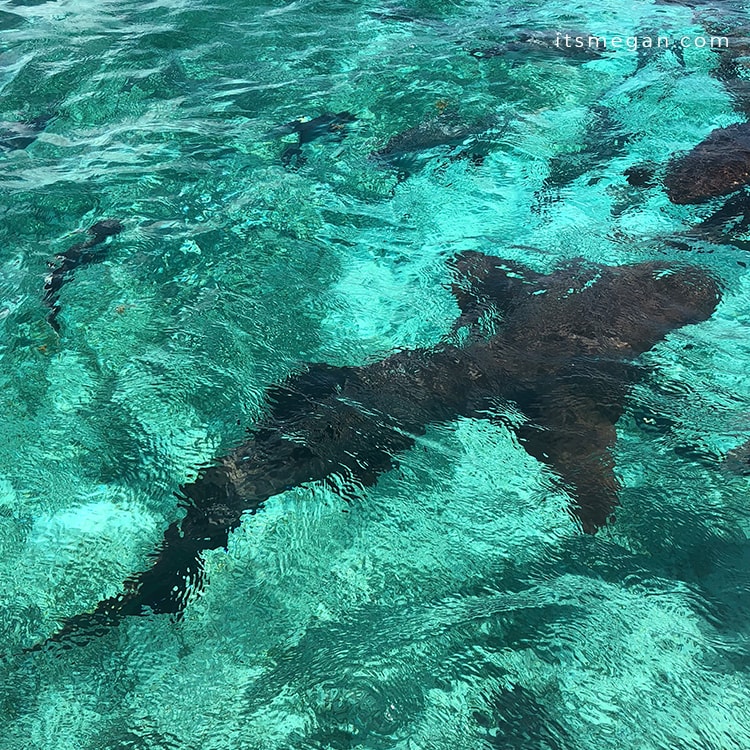 This might have been the highlight of the trip for me! The small group we were with was comprised of about 50% snorkelers, 50% scuba divers. Having done snorkeling tours in the past, the fact that this was at a “reserve”, and that we needed wristbands made me expect a park-situation, with facilities, food, shops, etc. NOT at ALL. The boat parked out in the middle of the water, where we showed the “ranger” our wristbands (he was floating around in his boat), and we hopped into the water! Right away we saw a conch shell, a sea turtle, and a sting ray.

The snorkeling tour lasts about 45 minutes before you hop back in the boat and take off for Shark Ray Alley. I’m not going to lie, jumping into shark-infested water was terrifying (they are nurse sharks, which they say don’t bite…). The guides feed the sharks so that you’re able to get a great view, and the sharks and sting rays swim right next to you! This tour is an absolute must on your trip to Belize!

Rent a golf cart and drive around! We rented through C&S Golf Cart Rental and I can’t recommend them enough. They met us at the water taxi so we didn’t have to carry our luggage around the island! Most of the time that we weren’t doing tours, we were driving around exploring, eating, shopping, drinking… The locals say there are “no rules” when it comes to driving the golf cart, but be aware that there are one ways. (oops). It does cost a few Belize Dollars to cross the bridge and go north, but there are a few really cool bars, so I recommend it! We were told that Secret Beach is on the north end of the island, but it was too long of a drive for us.

What to Eat and Drink 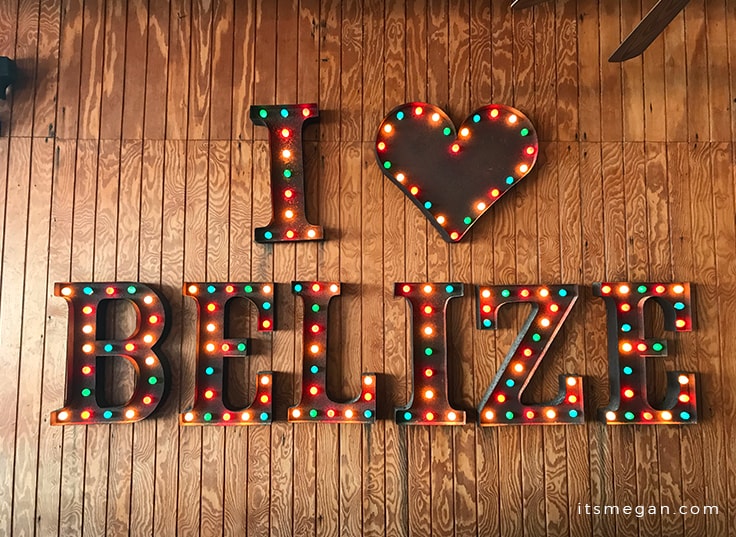 As I mentioned earlier, Sunbreeze Hotel is home to one of the restaurants people typically blog about – Blue Water Grill.

This place was cute! The atmosphere was great! There was a band, it’s right on the water, and it’s home to the I <3 Belize sign you’ve probably seen on Instagram. Definitely worth stopping by! 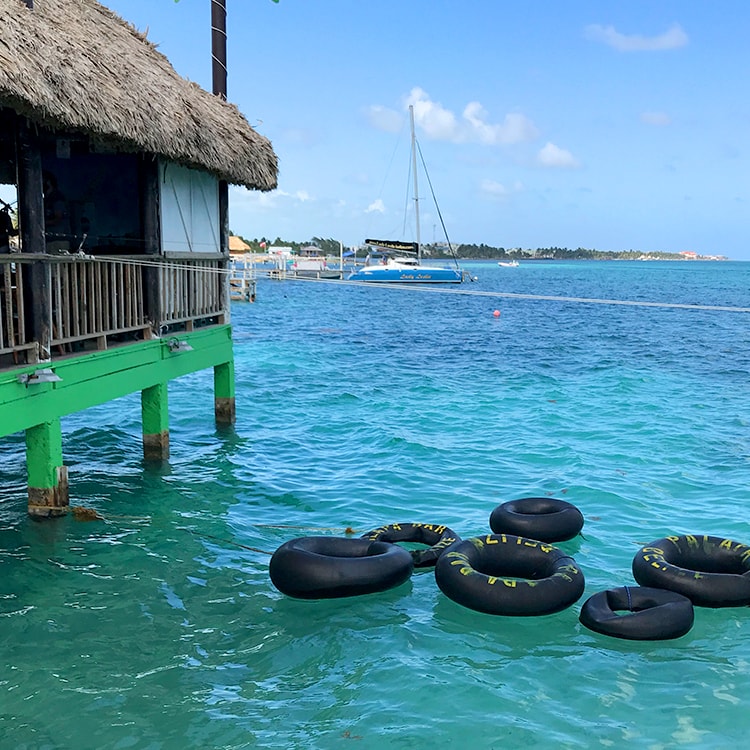 I really enjoyed this place! We had drinks, mozzarella sticks (odd, but they’re huge and delicious here, so definitely order them!) and conch fritters! The bar itself is open air, had live music, and TVs. Also, if you walk out to the end of their pier, you can relax on a lounge chair in the sun, or hop in the water and lay on an inner tube. They have a pulley system, so you can get a bucket of beer delivered to you while you’re in the water! 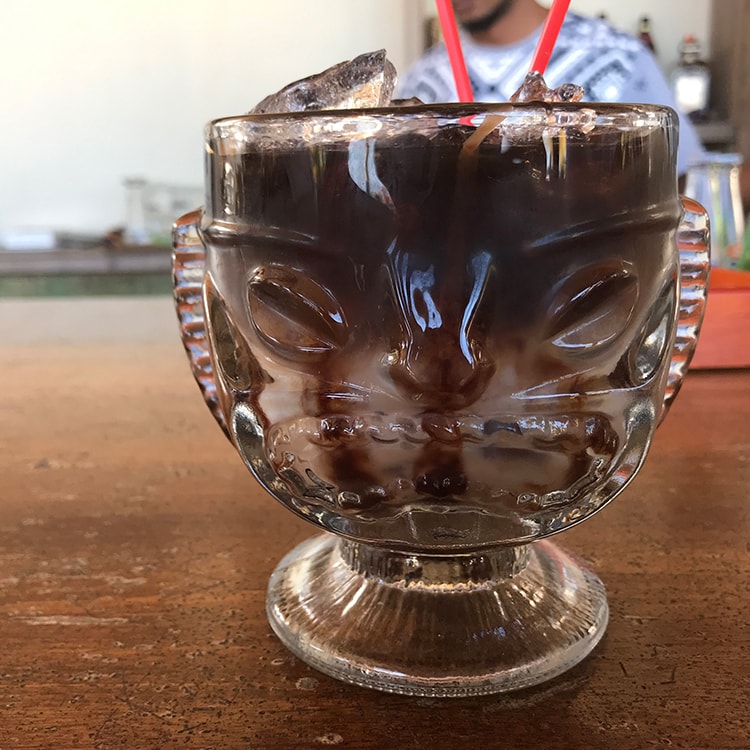 This is one of the two bars we stopped at that’s north of the bridge. It’s owned by an ex-pat and is right on the beach! The drinks were delicious, they have bags (cornhole?) in the sand, and a game I’m now addicted to called Shut the Box. They will even pay you if you can win the game in one turn. 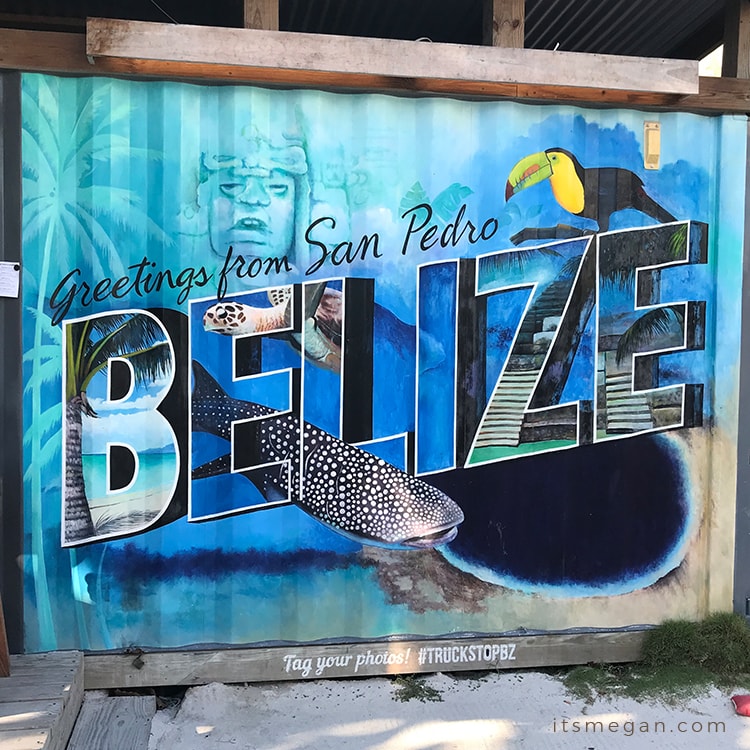 Also north of the bridge, there’s a bar called The Truck Stop. It’s a seating area surrounded by a bar and two shipping containers, turned into a taco stand and an ice cream stand. They have bags, live music, and an instagrammable sign. They also have a pool in the back that overlooks the water, and they show a movie there at night! You can swim, drink and watch a movie at the same time. Such a great idea!

This was our first stop when we arrived! We set off in our golf cart, the sky was blue, the sun was beautiful! Two minutes later, the sun was gone and it was a torrential downpour.. we even had to stop the golf cart because there was zero visibility. By the time we arrived at Average Joe’s, the sun was back out and the sky was blue! Rainy season, ugh! Obviously we needed a drink after that, and this place was perfect!

Other Things to Note

I hope this helps you plan your trip to Belize! And if you weren’t planning a trip to Belize, I hope you are now! If you’re looking for tips on how to plan your next trip, check out this blog post!

This post contains affiliate links to products that I make a small commission off of if purchased. 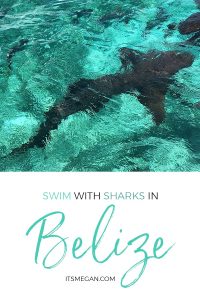 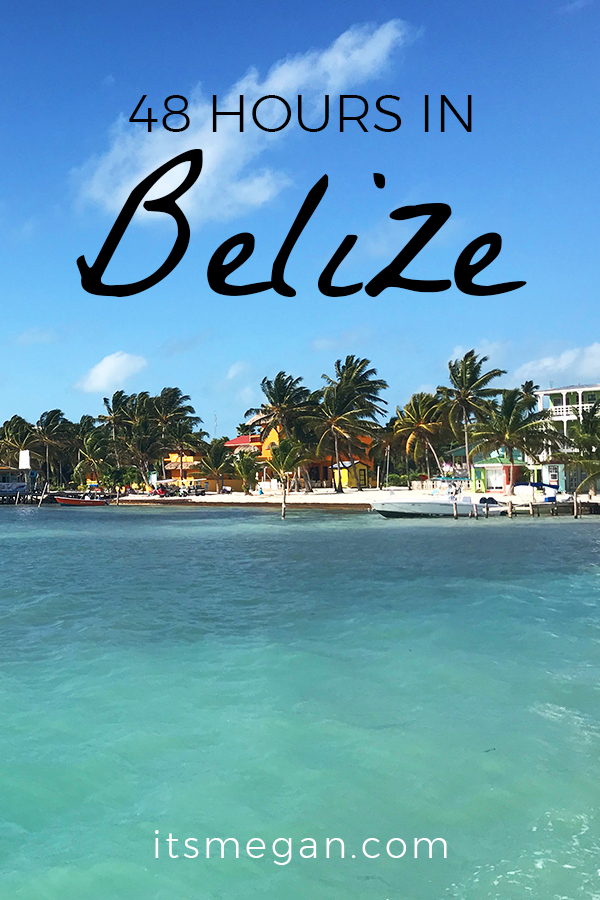 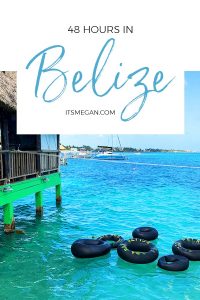 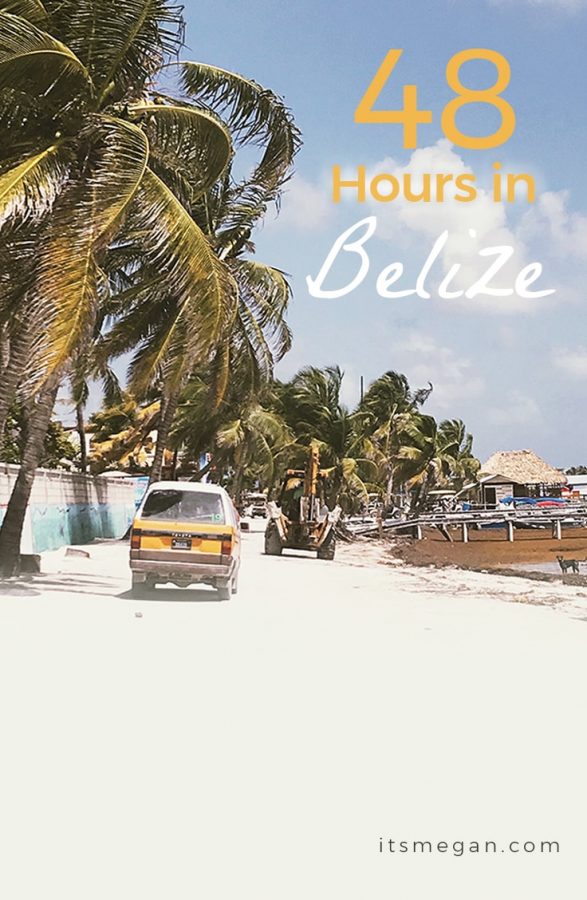